In Australia the three levels of government work together to provide us with the services we need. This in-depth paper explores the roles and responsibilities of each level, how they raise money and how they work together. Case studies show how the powers of the Australian Parliament have expanded.Source 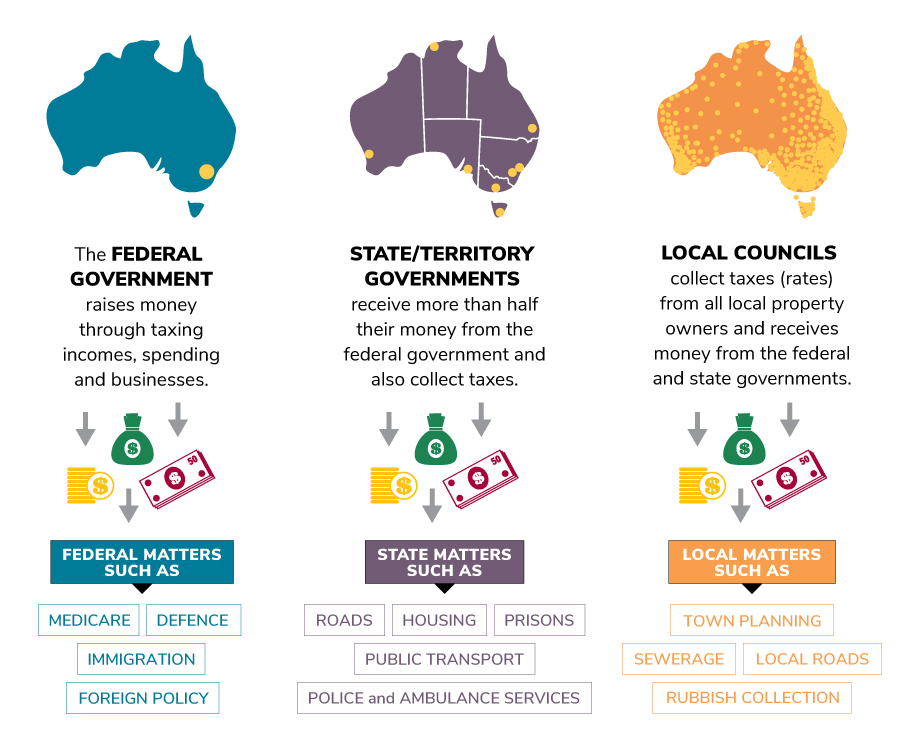 Description
This diagram illustrates the three levels of government—the law-making bodies in Australia with three maps of Australia: Local councils (located around Australia in each local council division); State/territory parliaments (located in the capital cities of each of the 6 states and 2 territories); and federal Parliament (located in Canberra, the nation's capital).

Statute law is made by parliament. In the Australian Parliament, a bill is a proposal for a new law or a change to an existing one. A bill becomes a law after it has been passed in the same form by the House of Representatives and the Senate and is given Royal Assent by the Governor-General. It is then called an Act of Parliament. Source

Common law is made by judges in a court, using precedent—decisions made in previous similar cases—to decide how they will judge a case before them. If no past cases with similar circumstances exist, a new decision is made, which would then become a precedent for a future similar case. If no statute law applies to cover a particular situation, common law will apply; however, statute law always overrides common law. Source

Australia is unusual among common law countries in not having a Constitutional Charter or Bill of Rights.However, common law courts have power to provide significant protection of human rights principles including the rule of law, except where legislation specifically overrides this power. Source