Further information can be obtained from www.rogerebert.com/reviews/edward-scissorhands-1990

Edward Scissorhands tells the story of Edward, a boy found living alone in a dark mansion on the top of a mountain. Edward is the creation of an elderly inventor who dies before he can replace Edward's scissor hands with conventional hands.

The motherly Peg takes Edward under her wing and invites him into her home to live as part of her family.

The world into which Edward is placed is a model of pastel-coloured conformity. Initially he is welcomed by the rest of the community as an entertaining oddity but is brutally rejected when things go wrong. 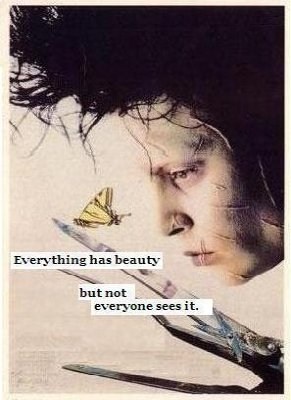