The world over, teachers hear the lament ‘why do we have to study Shakespeare?’ from their students. Here are the answers to that ubiquitous question! This densely packed and student-friendly programme includes well-known examples from his plays and a look at his contribution to the English lexicon to demonstrate Shakespeare’s enduring impact on language and the study of literature.

How to write a sonnet

Language in Romeo and Juliet

The form, structure and language of Romeo and Juliet reveals how Shakespeare presented his play to his audience, exploring his intentions and what he was trying to make the audience think and feel. Source: https://www.bbc.com/bitesize/guides/z8f3gk7/revision/1

Epic, Passionate, Poetic
Right from the Prologue we know Shakespeare wants to make this play a big deal. Check out how epic his language is, right from the beginning:

Two households, both alike in dignity
(In fair Verona, where we lay our scene),
From ancient grudge break to new mutiny,
Where civil blood makes civil hands unclean.
From forth the fatal loins of these two foes
A pair of star-crossed lovers take their life; (Prologue.1-6)

Obviously, this isn't going to be a romantic comedy, not with mighty words like "ancient grudge," "civil blood," "fatal loins," and "star-crossed lovers." Melodramatic? Sure. But Shakespeare makes it work, because the plot actually does live up to the hype.

Blank Verse
Expect for exchanges between servants and some bawdy jokes, Romeo and Juliet is written in blank verse, which is a less-fancy way of saying "unrhymed iambic pentameter."

The English language owes a great debt to Shakespeare. He invented over 1700 of our common words by changing nouns into verbs, changing verbs into adjectives, connecting words never before used together, adding prefixes and suffixes, and devising words wholly original. Below is a list of a few of the words Shakespeare coined, hyperlinked to the play and scene from which it comes. When the word appears in multiple plays, the link will take you to the play in which it first appears. For a more in-depth look at Shakespeare's coined words,

"Good Night, Good night! Parting is such sweet sorrow, that I shall say good night till it be morrow." - (Act II, Scene II).

"What's in a name? That which we call a rose by any other name would smell as sweet". - (Act II, Scene II).

"It seems she hangs upon the cheek of night like a rich jewel in an Ethiope's ear" . - (Act I, Scene V).

"See, how she leans her cheek upon her hand! O that I were a glove upon that hand, that I might touch that cheek!". - (Act II, Scene II). 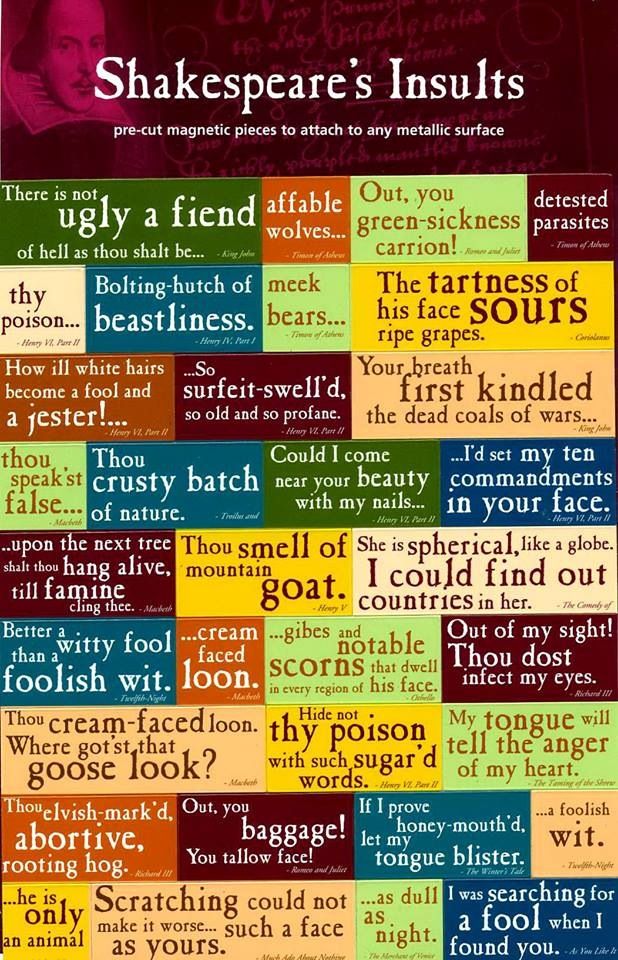