The most obvious theme in Romeo and Juliet is that of love, but the play deals with many other important ideas too. Shakespeare invites us to examine the importance of fate, death, honour, friendship and duality. All of these themes are still relevant today, which is why the play is still popular after all these years.

The main themes in Romeo and Juliet are: 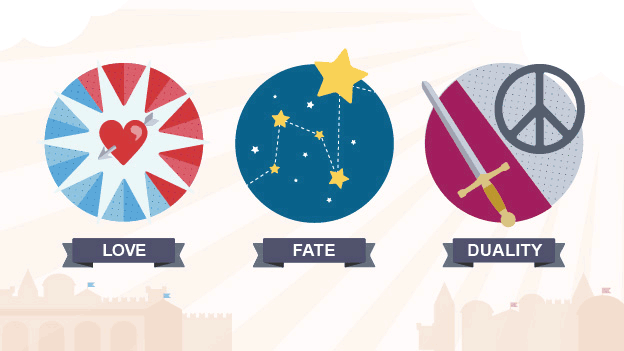 The theme of love in Romeo and Juliet also extends beyond the love that Romeo and Juliet feel for each other. All the characters in the play constantly talk about love. Mercutio thinks love is little more than an excuse to pursue sexual pleasure and that it makes a man weak and dumb. Lady Capulet thinks love is based on material things:..

Another important theme is the idea of value and doubleness. Just as language is ambiguous, so are value judgments. As the Friar reminds us, "virtue itself turns vice being misapplied, /And vice sometime's by action dignified" (II.iii.17-18). Within a flower, for example lies both poison and medicine. Similarly, the deaths of Romeo and Juliet are tragic but also bring new life to Verona. The Friar's own role in the play contains this ambiguity. Although he tries to help the lovers, his actions lead to their suffering. Shakespeare's message is that nothing is purely good or evil; everything contains elements of both. Ambiguity rules.

Light/Dark Imagery
One of the play’s most consistent visual motifs is the contrast between light and dark, often in terms of night/day imagery. This contrast is not given a particular metaphoric meaning—light is not always good, and dark is not always evil. On the contrary, light and dark are generally used to provide a sensory contrast and to hint at opposed alternatives...

Night-time
The combination of light and dark makes an interesting motif in Romeo and Juliet. But for our young lovers, the night-time itself is an important motif as well. The evening hours holds all of the significant moments for Romeo and Juliet. They meet; they pledge their love; they elope; they commit suicide...

Opposite Points of View
Shakespeare includes numerous speeches and scenes in Romeo and Juliet that hint at alternative ways to evaluate the play. Shakespeare uses two main devices in this regard: Mercutio and servants. Mercutio consistently skewers the viewpoints of all the other characters in play: he sees Romeo’s devotion to love as a sort of blindness that robs Romeo from himself; similarly, he sees Tybalt’s devotion to honour as blind and stupid...

In his first appearance, in Act 2, scene 2, Friar Lawrence remarks that every plant, herb, and stone has its own special properties, and that nothing exists in nature that cannot be put to both good and bad uses. Thus, poison is not intrinsically evil, but is instead a natural substance made lethal by human hands...

In Act 1, scene 1, the buffoonish Samson begins a brawl between the Montagues and Capulets by flicking his thumbnail from behind his upper teeth, an insulting gesture known as biting the thumb. He engages in this juvenile and vulgar display because he wants to get into a fight with the Montagues but doesn’t want to be accused of starting the fight by making an explicit insult. Because of his timidity, he settles for being annoying rather than challenging. The thumb-biting, as an essentially meaningless gesture, represents the foolishness of the entire Capulet/Montague feud and the stupidity of violence in general.

Queen Mab
In Act 1, scene 4, Mercutio delivers a dazzling speech about the fairy Queen Mab, who rides through the night on her tiny wagon bringing dreams to sleepers. One of the most noteworthy aspects of Queen Mab’s ride is that the dreams she brings generally do not bring out the best sides of the dreamers, but instead serve to confirm them in whatever vices they are addicted to—for example, greed, violence, or lust. Another important aspect of Mercutio’s description of Queen Mab is that it is complete nonsense, albeit vivid and highly colorful.