By the mid-12th century (A.D.) provinces in Japan were in disorder with warrior bands fighting among themselves, regional chieftains challenging the central government, the provincial-governor system failing, private estates being carved out of the public land system, taxes due to the state diverted into the coffers of nobles, temples, and local warriors. And at the centre, most emperors were child-pawns in the hands of Fujiwara regents or, if they did reach maturity, had to abdicate in order to exercise some degree of power. The capital itself was subject to depredation by armed bands.

From the mid-twelfth century the Taira warrior family, led by Taira Kiyomori forced itself into the capital and into power over the court. This effectively marked the beginning of what has been described as warrior dominance, or warrior rule, in Japan. The Taira, like the Fujiwara before them, chose to rule by manipulating the court from within the capital. When, however, the Taira were crushed by their warrior rivals, the Minamoto in 1185, power moved to the eastern provinces and warrior domination was more clearly expressed in the formation of a garrison government, bakufu, headed by shoguns. The Kamakura regime was overthrown in 1333, replaced briefly by a restored imperial government headed by Emperor Go-Daigo, who was, in his turn, removed by the Ashikaga warrior leaders who had brought him to power. Ashikaga Takauji established his bakufu in the Muromachi district of Kyoto in 1336. The Muromachi bakufu, vigorous in the late fourteenth and early fifteenth centuries, proved unable to prevent a descent into civil war in the fifteenth and sixteenth centuries, Japan’s age of warring provinces, sengoku jidai.

The long, war-torn, four-hundred-year period, from the mid-twelfth century through the Kamakura (1185-1333) and Muromachi (1336-1573), to the mid-sixteenth periods, is often described as Japan’s mediaeval age, chûsei. The establishment of the shogunate (or bakufu) at the end of the twelfth century saw the beginning of samurai control of Japan for 700 years until the Meiji Restoration in the middle of the nineteenth century.

From “Historical Periods of Japan.” Handbook to Life in Medieval and Early Modern Japan, Facts On File, 2005.

WABI-SABI from Cristóbal Vila on Vimeo.

The above animation by Cristobal Vila captures the "aspects that interest me the most about traditional Japan," featuring "scenes inspired by nature, gardens, architecture, interior scenes, etc." And it attempts to "create a calm and balanced atmosphere through the use of light, composition, materials, movement… and the choice of the motifs themselves."

For more information on the Video Wabi-Sabi A handful of memories from traditional Japan click this link to go to the Vila's site. 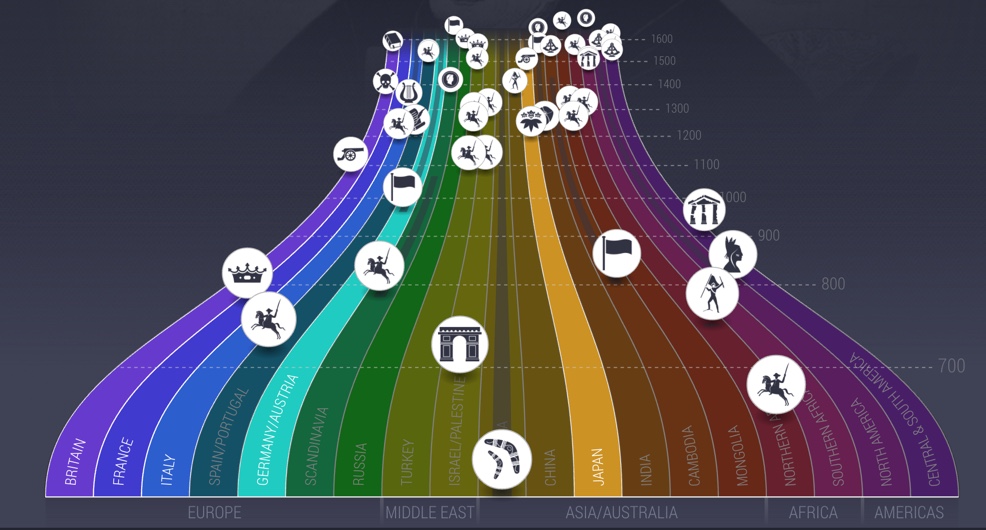 Moments in Time is an interactive timeline presenting key events that occurred around the world between 650 and 1918 CE.

This digital resource enables you to see what was happening, in different locations around the world, at any moment in time – simply scroll the timeline to travel through time and explore when and where important historical events occurred.

The end of Japan's isolation