Religion has always been an important aspect of Japanese culture & life. Over time, it has helped to shape the social & political structures within it. Shinto and Buddhism are Japan's two major religions. Shinto is as old as the Japanese culture, while Buddhism was imported from the mainland in the 6th century. Since then, the two religions have been co-existing relatively harmoniously and have even complemented each other to a certain degree.

Japan's oldest religion, dating back to prehistoric times, is Shinto. Shinto means 'the way of the gods'. It is based on the worship of nature and the gods, and on myths that were passed on verbally. Once a writing system had come to Japan from China, the myths were recorded. 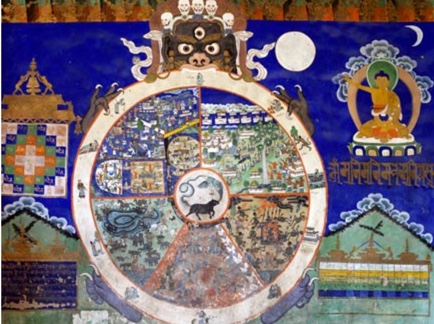 The Bhavachakra, the 'Wheel of Life' or 'Wheel of Becoming', is a mandala - a complex picture representing the Buddhist view of the universe. To Buddhists, existence is a cycle of life, death, rebirth and suffering that they seek to escape altogether.
The Wheel is divided into five or six realms, or states, into which a soul can be reborn. It is held by a demon. Around the rim are depicted the twelve stages of dependent origination. This gallery will explain the parts of the diagram.

The Shinto religion originally had no buildings as places of worship. People worshipped things in nature that were sacred to them. These places were marked by straw ropes that were hung with strips of paper. Shinto shrines, made of wood, exist today in almost every city, town, village or suburb. These shrines often have only one room inside, and a peaceful garden.

The Shinto religion does not worship statues that represent gods, so these are not found in the shrines. People may visit a shrine to celebrate the eve of a new year, or to ask for help during a difficult time. They make offerings as part of the process of worship. Offerings include coins, sometimes food or drink, and occasionally a dance or a sumo contest. A part of the Shinto religion includes the worship of ancestors and national heroes who have become gods. Cleanliness is an important part of the Shinto religion, and when a person approaches a Shinto shrine he or she must participate in rituals such as washing the mouth and hands.

The holiest Shinto shrine in Japan is the Ise shrine, in Nara. This shrine is sacred to the Shinto sun goddess, Amaterasu, and was built approximately 1300 years ago. In 670 AD it was rebuilt after a fire. This shrine has been demolished and rebuilt every 20 years. Two sacred treasures, a jewel and a mirror, are thought to be kept there. The sun goddess is believed to have given these objects to the mythical Japanese emperor, Jimmu. The Buddhist temple Horyuji, the oldest building in Japan, is also found in Nara.

The holy books of Shinto are the Kojiki or 'Records of Ancient Matters' (712 CE) and the Nihon-gi or 'Chronicles of Japan' (720 CE). These books are compilations of ancient myths and traditional teachings that had previously been passed down orally.

The holy books are not exclusively Shinto though - the dates are very significant, since by the 8th century, when they were compiled, Japanese religious life had received considerable input from Buddhism and Confucianism, both of which coloured the contents of these books.

Some of the myths have a very clear political purpose. In a wide sense, they are intended to establish the primacy of Japan and the Japanese over all other countries and peoples and in a narrow sense, to give divine authority to the ruling classes of Japan, and to some extent to establish the political supremacy of the Yamato clan over the Izumo clan.

The myths teach a number of truths: 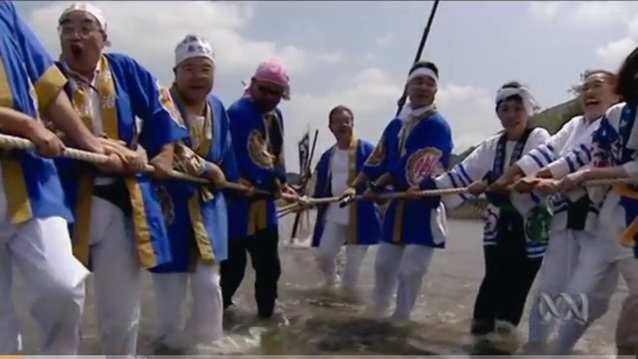