Ransom captures three men considering their fractured sense of self, the limitations of their social roles and their transitory place in the world and the annals of history. They are each standing on the brink of extraordinary self-revelations: ‘Look, he wants to shout, I am here, but the I is different’ (p.209). It is their moment of ‘iconoclasm’ – of image-breaking, where everything you thought you knew must be destroyed and recreated anew: ‘Whatever it was is over. Or, mysteriously, has just begun’ (p.107).

Characterisation in Ransom is achieved through memory, flashback, the perspective of others, and words given to the characters as they reflect on their lives and plead their respective causes. 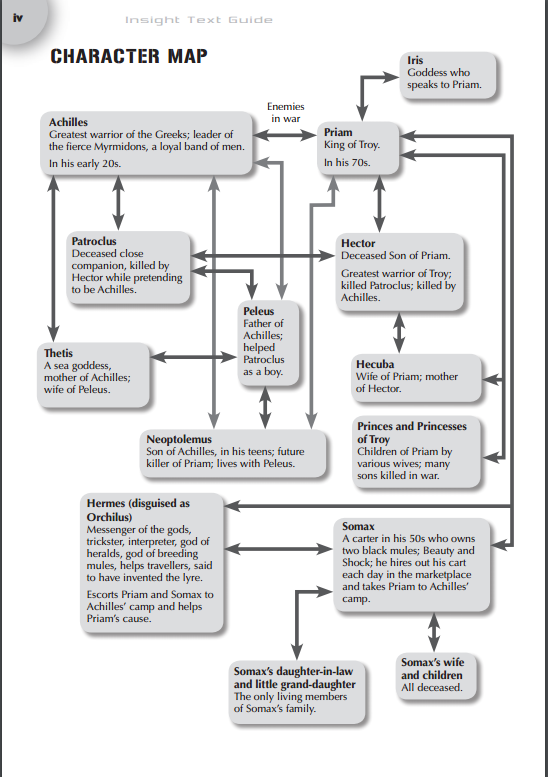 Balius and Xanthus: These two immortal war horses were gifts from the gods to Peleus when he married Thetis. They were given to Achilles by his father. Noted for their beautiful appearance, swiftness and high spirits, they pull Achilles’ chariot as he drags Hector’s corpse in the dust for eleven days.

Beauty and Shock: Two black mules (hybrid offspring of a horse and donkey) who represent everyday life in Troy. They stand in contrast with Achilles’ war horses, who belong to the epic world of battle.

Beauty is perhaps responsible for Somax's son’s death, having lost her footing, and possibly “knocked him sideways”(p 140). However, unlike Achilles, who vents his anger at Hector for the loss of Patroclus, Somax who “felt like punching her”, instead comforted her. He began “sobbing fit to break my heart”. The two become inseparable; Somax became incredibly fond of her. Malouf presents this not only as a preferable manner of dealing with grief but also suggests that it helps Somax deal with loss and enriches the grieving father.

Hermes: The messenger of Zeus (the chief of the gods), Hermes is the god of heralds and interpreters, literature and poets, travellers and borders, and the breeding of horses and mules. He is known to be a trickster and joker.

Achilles: The greatest warrior among the Greeks, Achilles is the son of a human father (Peleus) and an immortal sea nymph (Thetis). He fights in King Agamemnon’s army against Troy but has little respect for that king. He is the leader of a warrior band called the Myrmidons. Achilles is caught between his desire for a hero’s death and wanting a long, peaceful life in his homeland of Phythia in Thessaly. According to prophecy, he is destined to die in the Trojan War.

The death of Patroclus, his closest companion and hinted lover, drives Achilles to insanity. Hector murdered Patroclus, and as a result, Achilles takes revenge by killing Hector. He then drags Hector’s dead body along the walls of Troy for the next 11 days. Achilles loses his sense of humanity, as he is possessed by his rage, hatred and grief.

Patroclus: A cousin and close companion of Achilles, Patroclus was taken in by Achilles’ father after accidentally killing a playmate. He fights and is killed by Hector while wearing Achilles’ armour. His death is greatly mourned by Achilles.

Neoptolemus: The son of Achilles and Deidamia, Neoptolemus lives with his grandfather Peleus after Achilles sails to Troy. Strong, red-haired and trained as a warrior, he is destined to kill Priam, king of Troy.

Automedon: A warrior-companion of Achilles, Automedon accompanies Patroclus into his final battle and is with him when he dies. He becomes an aide to Achilles after Patroclus’ death.

Priam (a name meaning ‘the price paid’ or ‘the ransomed one’): The king of Troy for many decades, Priam is now in his seventies and aware of his physical weaknesses. As a child, his sister Hesione saved him from slavery and had his name changed from Podarces to Priam. He is able to hear and see the gods from time to time and believes they guide him. Priam wants to accomplish a heroic deed before he dies to redeem his self-esteem and be remembered for something other than his savage death.

﻿After the death of his son Hector, Priam envisions himself in plain clothing, riding a plain cart to Achilles who is effectively holding Hector ransom. His vision is the catalyst for the novel’s events, for his journey is one of learning and self-development. Though the royal family is doubtful of his plan to save Hector, Priam is resolute and insists that he needs to try his best to confront Achilles as a father, rather than as king. After many decades as king of Troy, Priam is determined to reinvent how he will be remembered; as a king who performed an extraordinary act of heroism in order to save his beloved son.

Hector: The eldest and dearest son of Priam and Hecuba, Hector is a great prince, warrior and hero. He kills Patroclus in battle, thinking he was Achilles, and is killed by Achilles in revenge. Hector is the husband of Andromache and father of the young Astynax.

Princes and princesses of Troy: Priam has had over fifty children, though many of them have been killed in battle. Those who appear in Ransom include the priest Helenus, the prophetess Cassandra, the princes Paris, Hippothous, Dius, Deiphobus, Panyamus and the young Polydorus.

Polydamas: A wise Trojan courtier who advises Priam not to go to Achilles’ camp.

Idaeus: The king’s herald, Idaeus is Priam’s official companion who always travels with him to act on his behalf and speak for him in public. He is replaced by the carter Somax for the journey to Achilles’ camp.

Somax: A simple, well-built, rough but rather wise fellow, Somax is a carter. He is about fifty years old. His cart and mules are chosen by the princes of Troy to take Priam on his journey to ransom Hector’s body from Achilles. His wife and seven children have all died, but he loves his remaining daughter-in-law (not named) and his granddaughter (also not named). He is very fond of his two mules, especially Beauty.

Somax is representative of the ‘common man’ in Ransom. He is chosen to escort Priam to Achilles. His simple and plain presence is contrasted with Priam’s royal status. He often engages in chatter and performs daily activities in a way that is foreign to the king. Although Somax is far from royalty, his great deal of affection for his daughter-in-law and granddaughter teaches Priam about love, family and life.